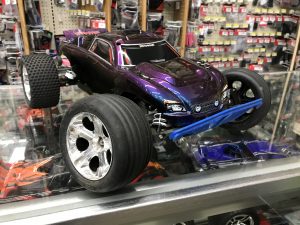 So we start this story with my coworker Brent wife’s Brushed Traxxas Rustler. He had just painted up a new body for it and was thinking about a little upgrade for the wheels and tires. After talking him into trying the Rustler 4×4 wheels, we had decided on using the Traxxas Talon Extreme 2.8″. Next, it was time to get some parts to make them fit just right! 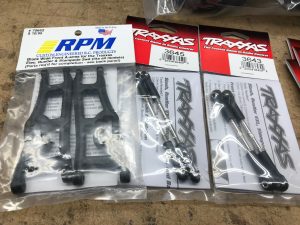 We started with the RPM Black Long Front Suspension Arms which adds some serious stability performance. We also picked up the longer Turn Buckle Link 61MM that was needed for the conversion. Since he was planning on upgrading to brushless in the future we also added ball bearings to the front and rear hubs along with the matching metal camber links for the rear of the truck.

Here you can see what we started with. The pictures show all the original parts that came with the Brushed Traxxas Rustler 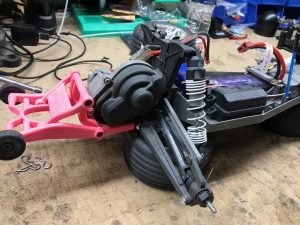 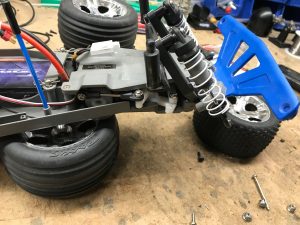 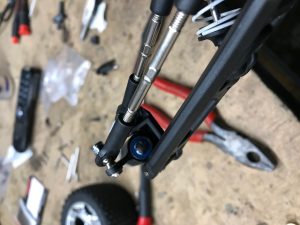 For the conversion I started by disassembling the front links (4 screws) and removing the 2 lower shock bolts and hinge pins. At this time I also removed the front carriers to install the ball bearings. For reassembly, I held the arms in place and reinstalled the inner hinge pins followed by the 2 lower shock screws. For installing the new longer camber links and toe links some flat top screws were needed (#3646)to replace the old shoulder screws. 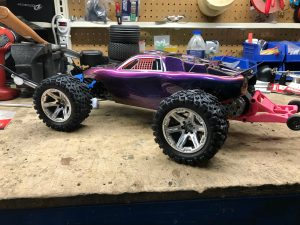 Now for the whole reason of this conversion (other than to improve handling) which is to fit the Rustler 4×4 wheels and tires. We decided on the Satin Chrome #6733R reassembled wheels. With the long arm conversion, it will allow you to run all the same offset wheels on your 2WD Slash, Rustler, or Stampede.